The Things Come to Town

If you haven't ever checked out Ironic Mom, you really should go do that now.  It's one of my daily regulars, a site that helps keep me sane by assuring me that I'm not the only one living La Vida Loca.  (Try starting with two of my favourite posts: the one about stripper Barbie and the one about being sexy.)  Recently Ironic Mom's little Things (the alter egos of her twins, William/Thing 1 & Vivian/Thing 2) stopped by as part of their whirlwind world tour, and we treated them to some typical aspects of life here in the Netherlands.  Hopefully we didn't traumatize them too much, but I wouldn't bet on it... 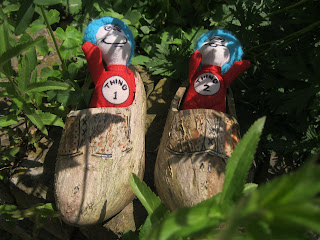 The Things arrived the evening before my scheduled stoma reversal, so they were tucked into bed early to rest up for the big op the next day.  Next morning they accompanied me to the hospital and were ushered into the spacious 4-bed room I would be sharing with various and sundry noises and smells people. They were thrilled with the view out the window, especially catching a glimpse of Fort SintPieter, which I assured them we could visit after the ordeal was over. 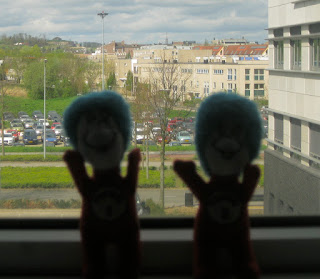 We then unpacked, loading up the bedside table with post-op essentials such as lip balm, tissues, good books, and trashy magazines.  The Things happily settled into the bed, much agog with my stories of tea served in real china, staff people who tend the gift bouquets brought in, and proper duvets to sleep under. 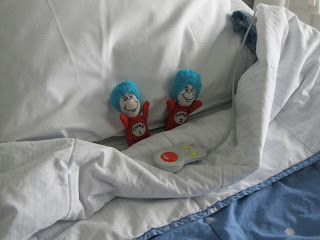 They were less than thrilled, however, when the nurse came with the gown to change into as they realized that my warning "if the Dutch are comfortable with nudity in the situation they think you are as well" was all too true.  They quickly devised a scheme to retain their modesty: 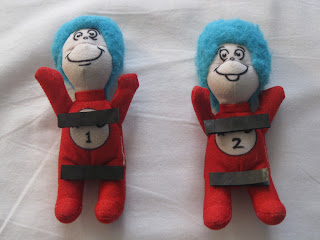 The amount of laughter and ribald comments which greeted them soon changed their minds.  They decided "when in the Netherlands, do as the Dutch" was a good policy, combined with a bit of "see no evil": 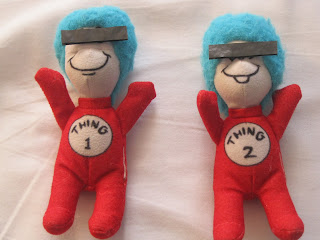 After this happy compromise we settled down to wait.  And wait.  And wait.  When the transport came to take me down, they blew kisses and wished me well, looking forward to some uninterrupted channel surfing.  When I was brought back up not too much later in a considerably foul mood they were irritated along with me that the op had been bumped.  We threw our stuff into our bag, went home, and drowned our sorrows in chocolate. 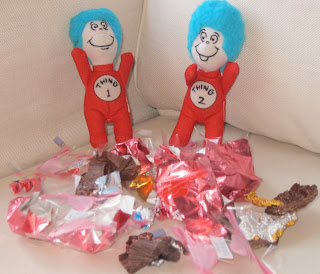 Next day we headed over to the dog park at Sint Pieter's.  The Things were a bit worried by the chill wind and the signs of rain in the sky and asked to stay in the car.  We had to be very strict and Dutch with them, saying, "Jullie zijn niet van zuiker gemaakt!"  (You are not made of sugar!) 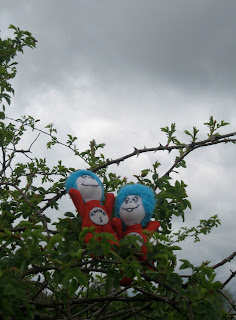 At first they hitched a ride along with Boo. 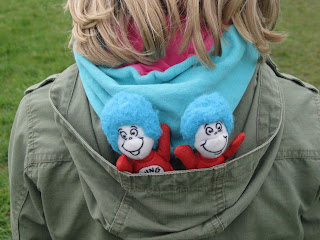 But after a bit, seeing how much fun everyone was having running around, they chose to ride along with Bubba. 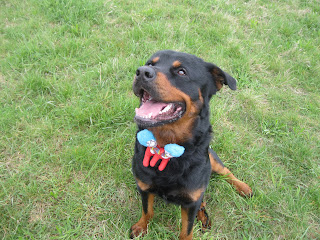 They had a grand old time, and got to see Fort SintPieter (relatively modern at 1701) up close and personal along with Boo, Bubba, and F. 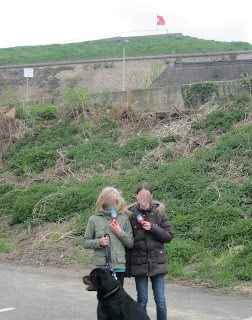 Our next big outing was to Efteling, the Dutch amusement park which inspired Disney Land.  The Things happily trucked along with Boo and Little Toot, oohing and ahhing at all the rides. 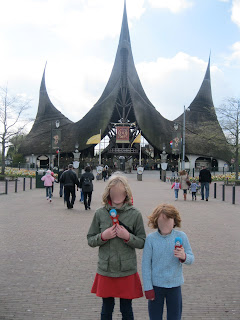 We hoped a fast ride on the wooden roller coaster Joris en de Draak ("Joris and the Dragon") would fluff out their hair but, alas and alack, it didn't.  It was a lot of fun anyway! They greatly enjoyed wandering the beautifully landscaped grounds; what could be more Dutch than tulips and windmills? 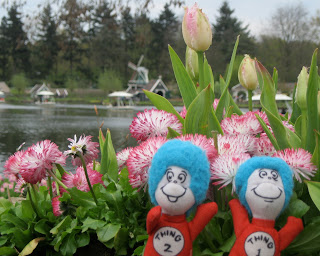 All the walking and screaming on rides gave the Things quite an appetite, so we stopped off for a snack of fritjes (french fries) before leaving. 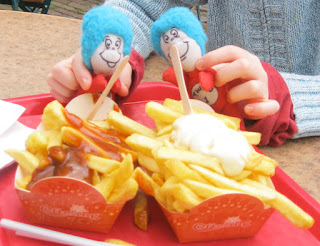 Thing 2 preferred the curry ketchup, but Thing 1 was partial to the mayonaise (pronounced mah-o-naze-uh).

A few days later was Queen's Day, a nationwide party in honor of Queen Beatrix.  The Things jumped right into the spirit, cross-dressing up (always guaranteeing a laugh in the Netherlands) in orange for the big party in downtown Maastricht. 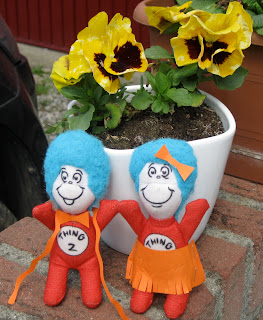 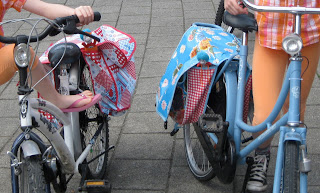 We joined right into the throngs of people laughing, dancing, selling things, performing, chatting.  The Things' favourite was the drum band. 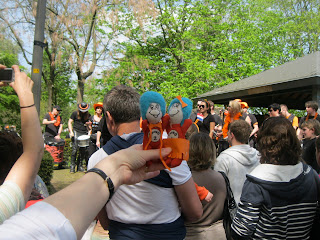 We were also able to share the spectacular view of the Maas, with stunning new pedestrian bridge and the older drawbridge in the background: 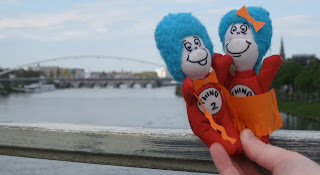 The Helpoort ("Hell Gate", 13th century), the oldest city gate in the Netherlands, was a big hit as well: 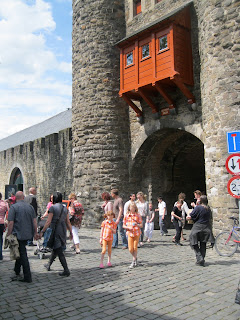 All this Dutch-ness was fun, but a bit overwhelming.  The Things began to feel homesick, so that evening we gave them our latest copy of Our Canada to read and played some Tragically Hip for them to listen to: 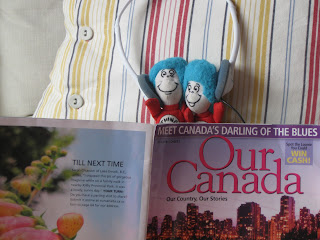 The next adventure was my operation, which miraculously took place as scheduled this time around.  The Things were very comforting in their post-op sympathy, joining me with bandages, tea, and warm compresses: 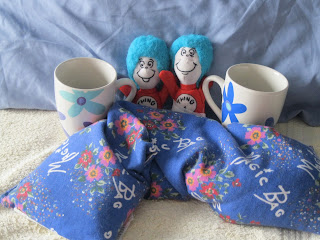 On their last full day with us the weather was gorgeous so we decided to go on a nice country wandeling (walk).  We went to the top of one of the local plateaus (this is the southern Netherlands!) to check out the wildflowers in bloom. 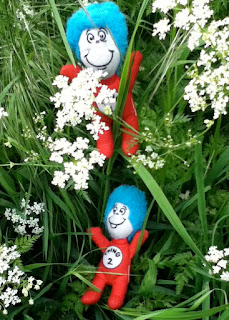 The Things recognized Queen Anne's Lace from back in Canada right away and had a little frolic in the Forget-Me-Nots as well: 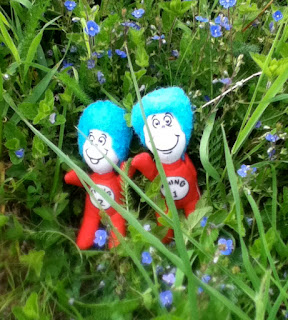 Check out that amazing blue!  (Oh, and the flowers are also pretty...)  Next was hunting up native wild orchids which grow here in Limburg.  The Things were thrilled to find two varieties, a pale lilac orchid: 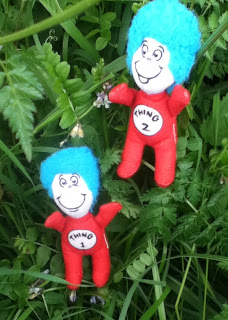 and a brighter fushia-purple one: 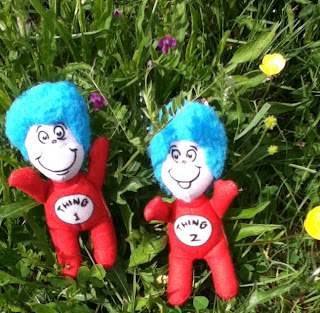 We admired the views from top of the plateau together, with the city of Maastricht in the distance: 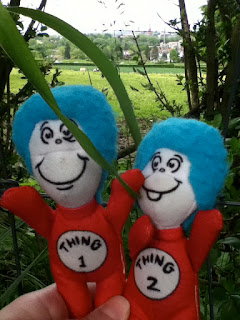 Then it was time to head home, for our last meal together.  We made it a celebration and served up a traditional Dutch springtime supper: white asparagus and boiled potatoes with a creamy butter sauce, ham, boiled eggs, and applesauce.  The Things loved the "Dutch White Supper" as Boo & Little Toot call it. 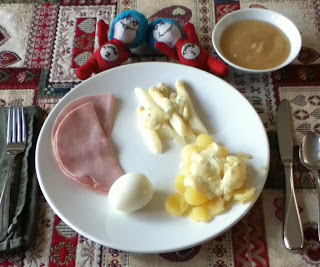 All in all, it was a fun visit and a very pleasant distraction for me through the process of this last surgery.

The Things are now off on their next adventure, but you can continue to follow them along via the Ironic Mom website.  Het was een leuk tijd, Thing 1 en Thing 2; hartelijk bedankt en tot ziens!

Who is Feisty Broad?

Feisty Broad
A wife, a mom, a dog owner. An American expat, living in the Netherlands. Throw in a chronic illness, multiple surgeries, subtract a colon, and you've got a woman determined to do more than just survive.